ملفات اخبار العرب24-كندا: Economically speaking, is giving in to borrowing and spending good or bad? It depends, perhaps, on whether you are a government. (Lucas Jackson/Reuters)

Two side-by-side transit ads on my morning commute this week seemed to define a Canadian predicament.

(My apologies to the people I had to nudge out of the way to snap pictures.)

What came to mind was that classic trope of a cartoon devil on one shoulder and an angel on the other, each arguing for the hearts of Canadians.

It's an idea that encapsulates some new data out this week on consumer borrowing — and it could be a factor in the coming federal election.

One ad, from Magical Credit, pictured a youth apparently elated to be able say "abracadabra" and get up to $20,000 to pay off "urgent bills."

The other ad — perhaps appealing to people who had tried the first option and repented — was from insolvency trustee Farber, offering a chance to eliminate your debt and live debt-free. "Live happier!" it exclaimed.

Competing transit ads: This one from a credit agency tells you to get rid of debt, while the one beside it (see below) offers quick and easy borrowing. (Don Pittis/CBC) 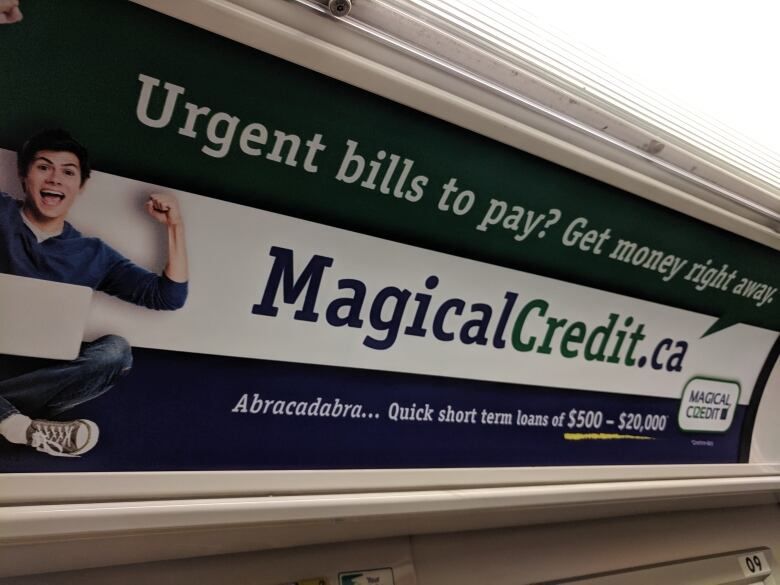 Opinions on which ad is the devil and which the angel may be addressed in the comments section below. (Don Pittis/CBC)

It's a question many Canadians may be asking themselves: As individuals, should we be borrowing more to boost the economy? Or be paying down debt in anticipation of weathering an anticipated storm? Which is the route to true happiness?

As we head into a federal election campaign, new bits of data provide food for thought about how Canadians are responding to fears of a potential future recession that is now so often in the news.

From the Office of the Superintendent of Bankruptcy Canada, there was a disclosure that consumer insolvencies are on the way up, rising nearly 17 per cent from one year ago.

It is important to realize that while the percentage increase is high, the absolute number of insolvencies — in the order of 10,000 a month — remains a tiny proportion of the more than 37 million Canadians and their households.

Another proviso is that the vast majority of these insolvencies are negotiated settlements where people have agreed to new terms of payment; actual bankruptcies are up less than three per cent.

The change over the year, however, seems to indicate something is happening — and it is quite different from the happy economic news of the past few weeks.

"It could be an indication of where the economy is heading," said Terry Goodtrack, CEO of AFOA Canada and an adviser to the government on financial literacy.

But Goodtrack says any individual statistic is open to different interpretations. For example, insolvencies may follow a period of economic optimism, where some people simply got in too deep.

The robust job creation announced last Friday was just the latest in a series of positive economic indicators; rising wages, a 3.7 per cent annualized growth rate and a resurgence in real estate sales have all been recent indicators of strength.

Such economic signals are being watched closely by the Bank of Canada's Stephen Poloz, but they will also be monitored by political parties vying for your votes. If these insolvency numbers are hinting at a swing in the economy toward gloom in the coming month, that could play an important role in an election that currently seems like a horse race.

A new report out yesterday from the research group Investor Economics on Canada's household balance sheet points to a different indicator on debt.

"The final months of 2018 delivered a sobering message to Canadian households and the financial services industry alike, with market concerns over Brexit, a U.S.-China trade war, and other factors depressing asset valuations and prompting a rise in interest rates," said Investor Economics CEO Goshka Folda in a statement.

The impact of that year-end gloom, the report said, is that Canadians have increasingly turned from tucking money away in bank accounts and other investments, to instead using it to pay down debt.

Once again, while the absolute numbers involved are not enough to budge Canadian debt loads that remain above 175 per cent of income, it is an indicator that people may be battening down for harder times. 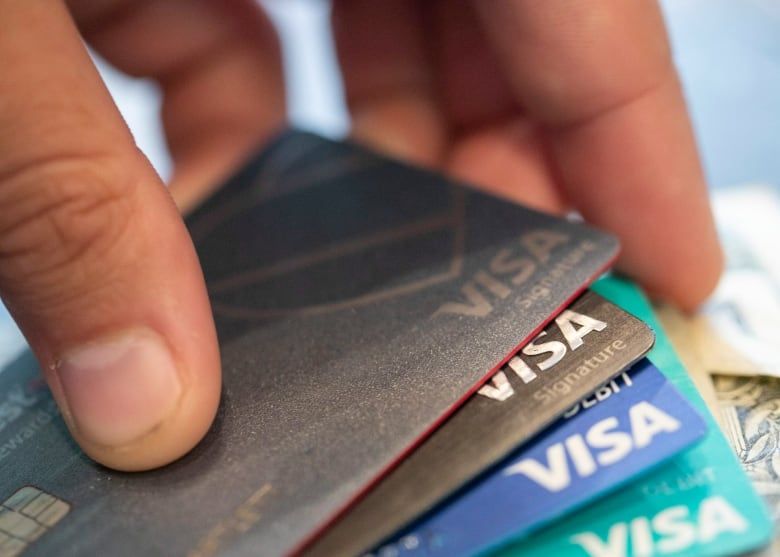 The debt to disposable income ratio in Canada is holding steady at 177 per cent. (Jenny Kane/Associated Press)

And it is one more sign of the self-fulfilling prophecy that can contribute to recession: Consumers borrow less and spend less. As spending falls, or in anticipation of it, businesses borrow less and invest else. And the entire economy shrinks.

That is why some economists want the Bank of Canada to cut interest rates. In theory, making money less expensive to borrow will make people and businesses borrow more, making the economy stronger.

In that way of thinking, it is Magical Credit and its abracadabra that is the angel on your shoulder. The idea of living debt-free, then, is the devil because it shrinks the economy.

Encouraging borrowing with rate cuts and government deficit spending may work for national economies. But when it comes to transit ads that are likely targeting "people who are not very financially literate," Goodtrack says borrowing to pay urgent bills is no solution.

"Here's a quick fix that is going to get you even worse into debt, right?"

In fact, for transit-riding consumers, he says he's not crazy about either of those advertising messages. Instead, he said, the answer is contacting one of the country's many non-profit credit counselling agencies.

For Canada and its voters, the choice may not be so easy.