ملفات اخبار العرب24-كندا: This is part of a Greenpeace Canada art installation of an albatross feeding her baby branded plastic trash, standing in a nest on a beach covered with plastic pollution. It features top plastic polluters identified through brand audits from shoreline cleanups in Canada. This years top five were Nestlé, Tim Hortons, Starbucks, McDonalds and Coca-Cola. (Vanessa Garrison / Greenpeace)

For the second year in a row, Nestlé and Tim Hortons were the top companies behind branded plastic bottles, coffee cups and lids and other plastic waste collected in shoreline cleanups across the country, Greenpeace Canada reported Tuesday.

Starbucks, McDonald's and the Coca-Cola Company rounded out the top five of the environmental advocacy group's list of plastic polluters.

"Year to year the general order can shift a bit, but overall it's those top usual suspects that we will keep seeing pop up," said Sarah King, head of Greenpeace Canada's oceans and plastics campaign.

"We know that all of the top five companies to date haven't made significant efforts to reduce [plastic] production. Their products are going to be in the environment until that happens." 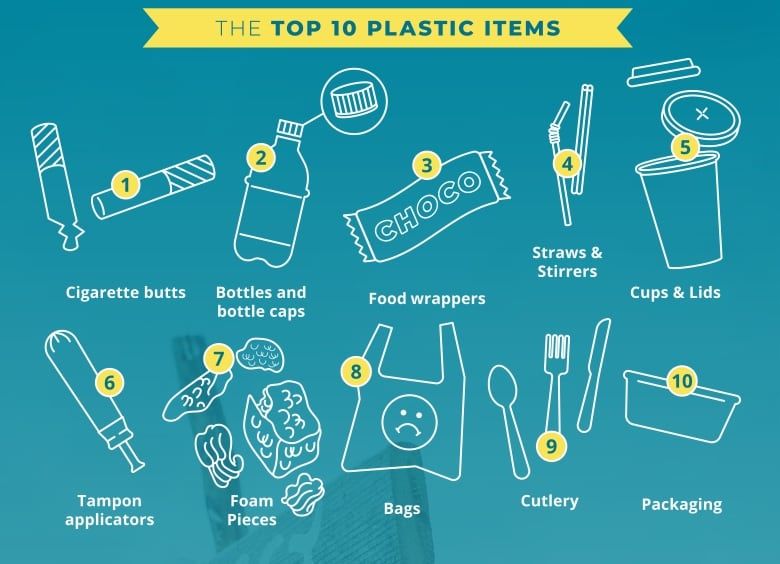 These are the top 10 plastic items found during shoreline cleanups. (Greenpeace)

The companies were named from 1,426 pieces of identifiably branded plastic out of 13,822 pieces of plastic waste collected and audited by 400 volunteers during shoreline cleanups between April and Sept. 21. The cleanups were organized by community groups participating in the global Break Free from Plastic movement in Halifax; Covehead, P.E.I.; Fredericton; Montreal; Toronto; Grimsby, Ont.; Broken Group Islands, B.C.; Vancouver and Victoria.

King said the primary goal of the brand audit was to "hold companies accountable for the plastic pollution problem that they continue to create."

But it's also intended to show Canadian governments how big a problem single-use plastics continue to be, as well as which items are problematic.

The top plastic items found this year were, in order:

Food wrappers were abundant in Vancouver, which accounted for half the wrappers collected across Canada. Halifax was the top site for tampon applicators, where 235 were collected.

In response to the Greenpeace report, Nestlé said in an email that it is working hard to ensure none of its packaging ends up in landfill or as litter. "We are accelerating our action to eliminate unnecessary plastics and ensuring that all our packaging is recyclable or reusable by 2025.," it said.

It added that in Canada, the company is "taking an active role in developing a well-functioning collection, sorting and recycling system so that all of our packaging gets recycled."

Tim Hortons noted that it has offered a discount, currently 10 cents, to encourage guests to bring a reusable mug, since 1978. (It has also been criticized for encouraging the use of single-use cups through its annual Roll Up the Rim contest).

The company announced in May that it would launch a marketing and advertising campaign to "help to educate a new generation of guests who could never imagine using a cup just once" and started selling reusable cups for $1.99. 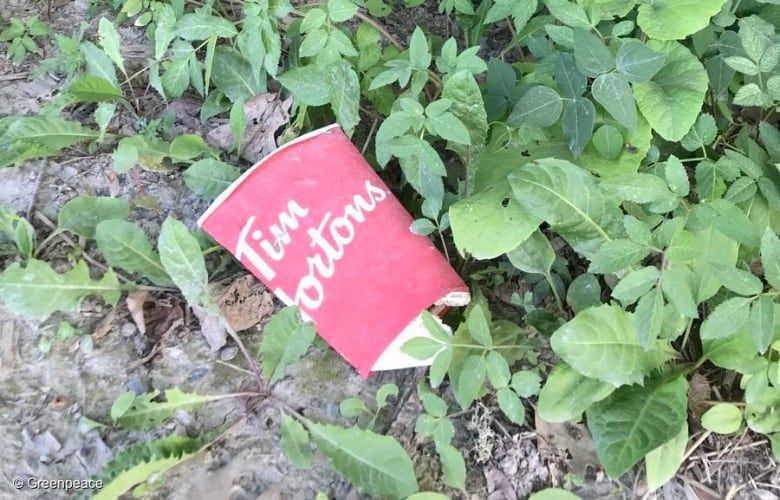 This Tim Hortons cup was one of 1,426 items with identifiable branding found during the cleanups. Tim Hortons says it has offered a discount for decades to encourage customers to bring reusable mugs, and has begun selling such mugs for $1.99. (Greenpeace)

Tim Hortons told CBC News in an email that it is moving to more recyclable and compostable items, including strawless lids, wooden stir sticks and compostable cutlery, and incorporating post-consumer recycled content into is cups and paper bags.

CBC News has reached out to the other companies in the top five Greenpeace list, but as of Wednesday afternoon, had not heard from them.

King called the companies' recent moves to more sustainable packaging "baby steps" that aren't enough, given the scale of the plastic pollution problem. 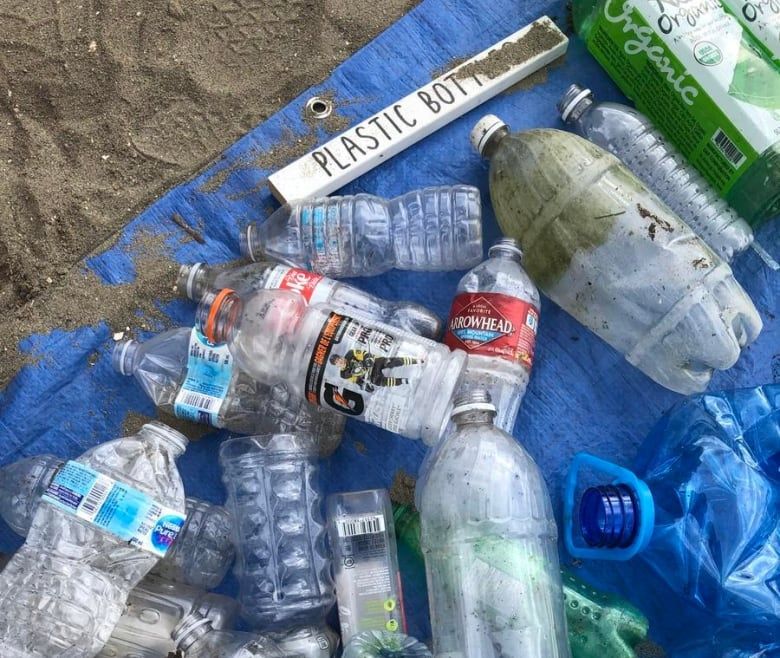 These are some of the plastic bottles collected during shoreline cleanups in 2019. Despite the fact that they are widely recyclable, they were one of the most common items found. (Greenpeace)

While many companies have promised to make their packaging more recyclable, King noted that plastic bottles are "always a top polluter," even at remote sites like the Broken Group Islands, were more than 1,000 were collected.

"What's interesting about that is they're also theoretically one of the most recyclable," King added. "Just because a plastic is theoretically recyclable doesn't mean it's being collected and being recycled."

This year's audit also noted that many compostable materials, including paper straws, compostable dog waste bags, paper cups, compostable takeout containers and bioplastic and wooden cutlery were found, most of them intact with the exception of some paper products that were starting to break apart. King noted that many of the other items are designed to break down only in industrial composting facilities, not in the environment.

"In the short term, at least, they're still polluting," she said. "Again, it reinforces this need to move away from disposables altogether." 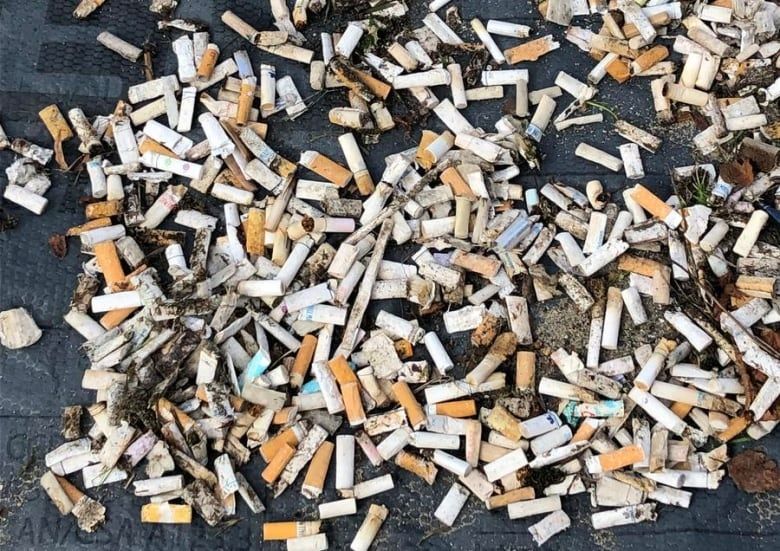 Cigarette butts were the top item found during the shoreline cleanups. (Greenpeace)

Will a plastic ban help?

So far, it's not clear whether plastic bans that are starting to come into force or companies voluntarily phasing out items like plastic straws have helped, King said, noting that many of those plastic items will persist in the environment for years.

The federal government has proposed a ban on single-use plastics, but hasn't said what items it will cover or when it will go into effect.

King thinks that will help, but says the ban needs to be comprehensive, covering all the items that are regularly found in the environment with reusable alternatives.

She hopes that will force companies to reduce their production of single-use plastic.

"It's not fair that the onus is totally on people not only to dispose of things properly … but then literally clean up the mess that's being made by large plastic polluters."