ملفات اخبار العرب24-كندا: Abdulahi Sharif, seen in this photograph after his arrest, is charged with five counts of attempted murder in relation to two truck attacks in Edmonton on Sept. 20, 2017. (Edmonton Police Service/Court exhibit)

The Crown prosecutor in the trial of the Edmonton man charged in the Sept. 30, 2017 U-Haul truck attacks says she will be able to prove Abdulahi Sharif intentionally tried to kill five people that night.

Sharif, 32, is accused of hitting a police officer with a vehicle, then stabbing him in the head. Hours later, he allegedly drove a U-Haul truck into downtown and intentionally ran into four pedestrians.

His trial began Wednesday in Edmonton Court of Queen's Bench. He has pleaded not guilty to all charges.

"This case relies heavily on people who were eyewitnesses to these events as they unfolded," Crown Elizabeth Wheaton said in her opening statement. "Every witness that the Crown will call has an important part of the story to tell."

Wheaton described the evidence she expects the jury will hear during the six-week trial, beginning with the attack on Edmonton Police Service Const. Mike Chernyk outside Commonwealth Stadium.

'The vehicle plowed into him'

Chernyk was working special duty that night during an Edmonton Eskimos football game.

Around 8 p.m., he was in front of his marked police SUV, with the blue and red lights flashing. Chernyk was wearing a yellow traffic vest and was behind a barricade when the Crown said he noticed headlights coming toward him.

"He heard the sound of a vehicle accelerating," Wheaton said. The vehicle was a white Chevrolet Malibu.

"[Chernyk] tried to move out of the way, but it was too late," Wheaton said. "The vehicle plowed into him and he flew through the air."

The officer landed on his back and suddenly found a man armed with a knife on top of him.

"A black man in dark clothing with a knife," Wheaton said.  "And he was trying to stab Const. Chernyk in the head with that knife." 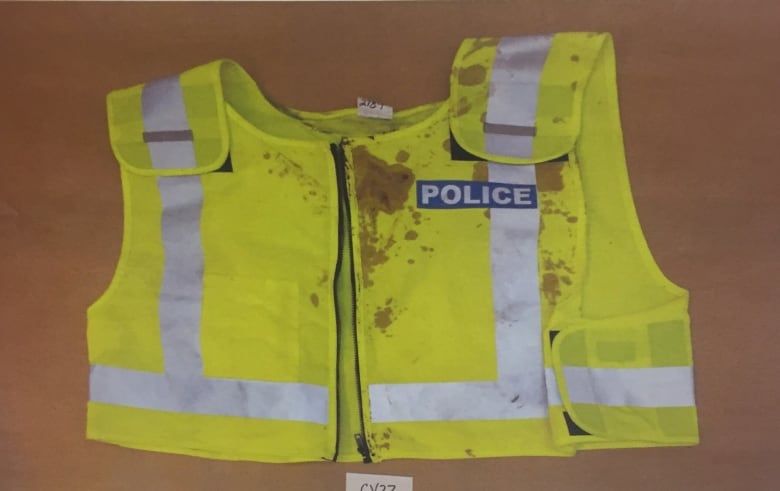 The yellow police vest worn by Const. Mike Chernyk, who defended himself against an armed assailant the night of the U-Haul truck attacks. (Edmonton Police Service/Court exhibit)

"He pushed as hard as he could on the handle of that weapon to keep it safe," Wheaton said.

Eventually Chernyk was able to roll over. His attacker lost the knife and "fled into the night," the prosecutor said.

"Abdulahi Sharif was the owner of the vehicle that hit Const. Chernyk," Wheaton said. "Not only that, but he closely matched the physical descriptions given by eyewitnesses that night. It's the Crown's position he was, in fact, Const. Chernyk's attacker.

"It is clear beyond a reasonable doubt that he intentionally hit Const. Chernyk with his vehicle and then stabbed him because his intention was to kill him."

Driver sped away from checkpoint

The jury was told Edmonton police and the RCMP spent the next few hours desperately searching for the man who attacked Chernyk.

Around 11:30 p.m. the same night, two police officers stopped a U-Haul at a checkpoint at 112th Avenue, on the on-ramp for Wayne Gretzky Drive.

An officer got the driver's licence and walked back to his vehicle to run the name. The U-Haul driver took off at a high rate of speed and headed toward the downtown, Wheaton said.

"That was the beginning of a dangerous flight from the police that would eventually result in collisions with at least four pedestrians," Wheaton said. "These were unsuspecting strangers who were just trying to have a fun night out on the town."

Four pedestrians were hit. The Crown alleges Sharif intentionally drove into a crowd of people.

"The Crown's position is that none of these collisions were accidents," Wheaton said. "He drove into these people intentionally because he was trying to kill them." 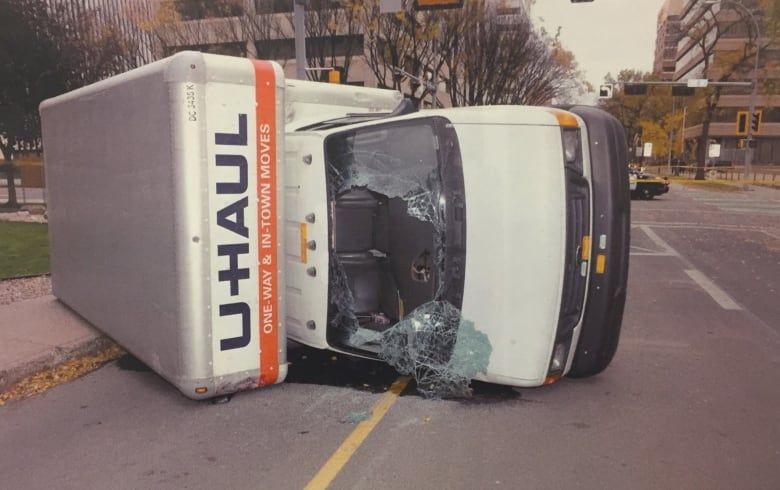 A damaged U-Haul truck lies on its side in a downtown Edmonton street after the Sept. 30, 2017 attacks. (Edmonton Police Service/Court exhibit)

The police pursuit ended when an officer used his vehicle to intentionally make contact with the U-Haul and push it over to its side.

Police removed Sharif from that U-Haul truck. "They smashed through the windshield, they pulled him out and they handcuffed him. It was over," Wheaton said.

40 witnesses to be called

Fourteen jurors were originally selected to hear the case, but before the trial began Wednesday, one was excused because she is not a Canadian citizen.

The remaining 13 jurors have been told they will hear from about 40 witnesses, including people who were injured that night, eyewitnesses and police officers.

The jury also heard from the primary investigator who described the scope of the police investigation.

"I had 367 police officers who provided information on this file," RCMP Sgt. Ned Mirjanic said.

He said more than a couple of hundred civilians were also interviewed in connection with the case.

"In terms of the file, I could only describe it as massive," Mirjanic said.

The trial is expected to finish Nov. 8.