‏Egypt’s finances remain fragile despite two major currency devaluations this year and the IMF package, which was announced in October as Egypt pledged to shift to “durable exchange rate flexibility” in line with long-standing IMF demands.

‏Since then, the gap between the black market exchange rate and the official rate has widened, raising speculation about the extent of exchange rate flexibility and the security of the IMF package.

‏Asked at a Euromoney conference in Cairo if it was correct to see the IMF executive board meeting scheduled for December 16 to be effectively a formality, Kouchouk replied: “Very accurate.”

‏Egypt was expecting an initial drawdown on the IMF loan of $750 million by the end of the July-June fiscal year, which would allow Egypt to “mobilise also a very decent package from other multilateral development banks as well as from the market”, Kouchouk said.

‏But he added that the government’s focus was winning support for comprehensive economic reform.

‏”We think that the funding shouldn’t be the main issue.” 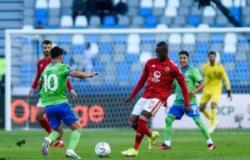