It took a fleet of refrigerated 18-wheeler trucks, an army of workers and some portable generators to make sure the fresh and frozen foods in Nova Scotia grocery stores survived the crippling power outages caused by Dorian.

"It's not an easy task and it is labour intensive," said Dave Sobey, director of support services with Sobeys Inc.

Without power, refrigerators and freezers at most grocery stores shut down, which could have led to a lot of spoiled food if Sobeys and Atlantic Superstore hadn't prepared in advance.

Both companies brought in 40 to 50 refrigerated trucks to store food. Workers cleared out long aisles of refrigerated products and loaded them onto the trucks.

"It would probably take an hour, two hours to strip down a section and move all refrigerated product into those coolers, those freezers, and into those refrigerated units," said Sobey.

Along with the refrigerated trucks, Atlantic Superstore also rotated generators between stores to help keep food cold, according to Mark Boudreau, the director of corporate affairs for Loblaw Atlantic, the company that owns Superstore.

Extra staff were also brought in to help with all the work, said Boudreau. 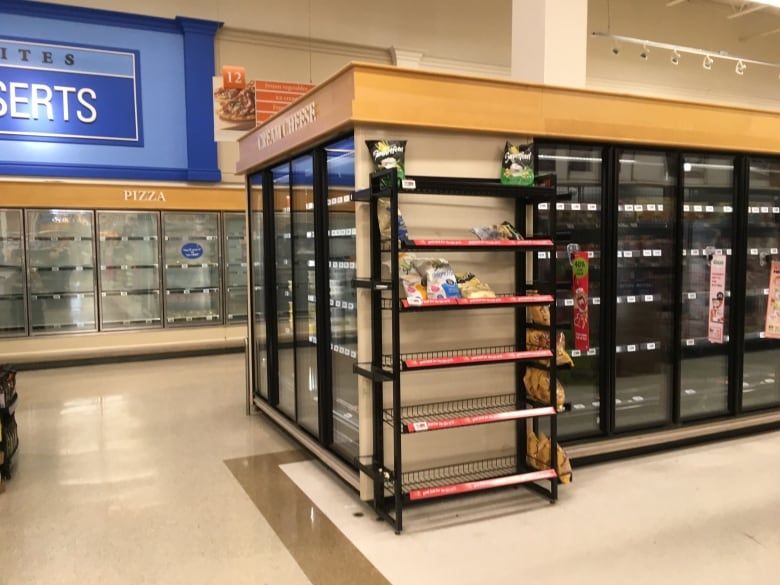 Sharon Murray was shocked to see empty freezers in the Atlantic Superstore on Barrington Street in Halifax on Monday. The company says the food that was in the freezers had not been thrown out, but was either in a refrigerated truck or had been sold. (Submitted by Sharon Murray)

Neither company could provide estimates on how much the extra work cost, or how much they had to pay to keep the refrigeration trucks going.

Once Dorian passed and power was restored, workers unloaded the food and put it back onto the shelves, allowing some stores to open on Sunday just a few hours after the storm.

"Like anything else it's harder to put back up then it is to take down. Obviously everything has a place in its place, so it can be a different process, for sure," said Sobey.

"We just continue to work hard to service our customers in our communities and do everything we can to bring it back up to speed and reopen, as long as it's safe for our employees."

Shopper Sharon Murray is glad the grocery chains have developed plans to handle the fallout from bad weather, but she thinks they could be doing more to prevent food waste.

"How can we help curtail this a bit as storms like this become more frequent?" she said.

"For their own business bottom line sake it would be worthwhile, especially in the coastal regions that are more often impacted by storms such as this, they might want to consider installing generators permanently."

Sharon Murray lives in Halifax and is concerned about food waste. She would like to see stores do even more to prevent food waste when there are power outages. (Submitted by Sharon Murray)

Murray also worried that the empty freezers she saw at the Atlantic Superstore on Barrington Street in Halifax on Monday were the result of the grocery chain throwing out spoiled food.

Not so, according to Boudreau. He said Atlantic Superstore had very little food spoil as a result of Dorian. However, any frozen product that warmed up too much and became unsafe to eat would be be discarded, he said.

"If a customer saw that shelves weren't full it really meant that it was either being kept in a secure location, which means a refrigerated reefer [truck], or that the product was being sold or it hadn't arrived at the store yet," said Boudreau.

Murray said if stores know a storm is coming they could also consider donating some of their perishable goods to organizations like Feed Nova Scotia, which might be able to store it.

"Just ways to prevent this [food] from being thrown out, because it's really sad and needlessly wasteful in my opinion," said Murray.