ملفات اخبار العرب24-كندا: A welder works on parts for an oil pump in a shop in Lloydminster this week. The economic downturn has hit the Prairie city hard. Residents tell CBC News they're frustrated but don't want to separate from Canada. (Jason Warick/CBC)

In Lloydminster, the heart of Prairie oil country, anger against the federal Liberal government is running high but there seems to be little appetite for separation.

"I'm proud to be a Canadian ... you can't beat the country we live in," Lloydminster Mayor Gerald Aalbers said in an interview this week.

Lloydminster sits on the border between Saskatchewan and Alberta, two provinces where the governing Liberals were completely shut out in the Oct. 21 federal election. Nearly every seat went to the Conservatives.

Since the election, talk in those two provinces of separating from Canada has grown, fuelled in part by frustration from the lengthy downturn in the oil industry.

A Facebook group promoting the idea has ballooned to more than 250,000 members. The hashtag #Wexit — standing for Western Exit — has trended on social media.

"Let's face it. The discussions around separation, it's alive and happening in communities here in the province," Saskatchewan Premier Scott Moe said earlier this week as he issued a list of demands to Prime Minister Justin Trudeau. 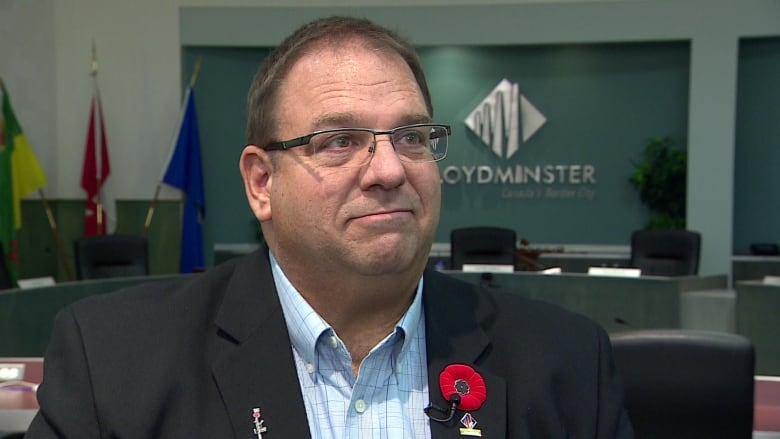 Lloydminster Mayor Gerald Aalbers says there is understandable frustration because of the downturn in the oil industry, but he's a proud Canadian and not an advocate of separation. (Don Somers/CBC)

Aalbers said the frustration is understandable and the government needs to do much more to address it.

In the Lloydminster area, only two of 45 oil wells are operating at the moment, he said. Companies are laying off workers. Housing starts are down. "For sale" signs and shuttered businesses are common.

Aalbers said the separation talk is an expression of this frustration and fear, but it doesn't mean people actually want to leave Canada and form a separate country.

"If I was losing my job, my business, my home, I'd be under stress. I'm going to lash back," he said.

"I think that's what we've seen. People have expressed those feelings that are close to their heart. But when they sit down and look at it, we live in a great country."

'For sale' signs and shuttered businesses dot the landscape in and around Lloydminster. (Don Somers/CBC)

CBC News spoke with dozens of people in and around Lloydminster this week, including oil workers, farmers, cab drivers, teachers and seniors.

They talked about a federal government they see as "anti-western" and hypocritical. They wonder why tankers are allowed to carry oil in the St. Lawrence Seaway but not the B.C. coast, effectively blocking Prairie shipments. They say it makes no sense for refineries in New Brunswick to process oil from Saudi Arabia but not from Western Canada.

But despite the frustration, none of them supported any form of separation.

Some, like Ted Harland, don't see the federal Liberals as the biggest problem.

Ted Harland used to sell most of his oil pumps to Lloydminster companies, but the downturn has forced him to look at international markets. (Don Somers/CBC)

Harland has been forced to lay off nearly half of the 15 workers at his oil pump assembly business. He said more pipelines and better policies would help, but there are two far bigger culprits: low world oil prices and new technology that requires fewer workers to operate.

In the Lloydminster area, the traditional method of cold water and sand extraction is being replaced by what's known as steam-assisted gravity drainage. Harland, Aalbers and others say this method requires 75 per cent fewer workers to harvest that same barrel of oil.

"There's a whole bunch of factors. Obviously, everybody hears about the pipeline and getting their oil to the market. But around the Lloyd area, it's a technology shift," Harland said in an interview from his shop floor.

Lloydminster resident Colleen Henning says the city's economy needs to diversify as the world moves away from dependence on oil. (Jason Warick/CBC)

More than $4 million worth of equipment is ready for sale in Harland's shop, but it won't end up in the Lloydminster oilpatch. He's selling to buyers in Indonesia, Australia and South America.

Teacher and NDP supporter Colleen Henning said she feels badly for her friends and parents of her students who've lost their jobs. She said the government needs to provide better job training to support families as they transition.

She also said Lloydminster needs to diversify its economy if the city is going to survive.

"At one time, every small town had a blacksmith shop. They had a hatmaker. We don't see those industries anymore. They're gone because times changed. It's something we have to accept."

Aalbers said the city is diversifying and looking internationally for new opportunities, but Lloydminster oil is still needed while Canada is dependent on hydrocarbons to heat their homes and run their communities.

The mayor said he's committed to working with all federal parties if they show they're serious about helping the Prairies.

"Democracy is imperfect," Aalbers said. "But it's the best system we have."

Conservatives won nearly every seat in Saskatchewan and Alberta during the recent federal election, including Rosemarie Falk in Battlefords-Lloydminster. (Don Somers/CBC)

Conservative MP Rosemarie Falk, who captured 70 per cent of the vote in the area, agrees there is work to be done.

"Obviously, I'm a federalist. I believe the country works very well when we're working together, and it would be a shame to see parts separate," Falk said.