ملفات اخبار العرب24-كندا: In Calgary, users can ride only on sidewalks, on pathways and in bike lanes. It is illegal to ride them on city roads. (Kyle Bakx/CBC)

For most of the summer, Ken Cheung didn't even carry e-scooters at his shop in downtown Calgary, although that quickly changed in late July.

Lime had just rolled out its e-scooter rental program and the city's inner city was buzzing with the white and green machines.

Cheung's store specializes in selling electric and folding bikes. Still, people were calling and coming into the shop asking about e-scooters.

"Absolutely," said Cheung, manager of Power in Motion. "We've had quite a bit of demand."

The shop sells a few of the two-wheeled machines every week, which usually cost between $800 and $1,300.

"You have the people who want to buy one for fun, and then you also have those who just want to buy one to commute because they had access to the Lime e-scooter and they found out, hey, this is not a bad way to commute to work," he said.

The Lime and Bird scooters function similarly to bike-share programs or services like Car2Go. 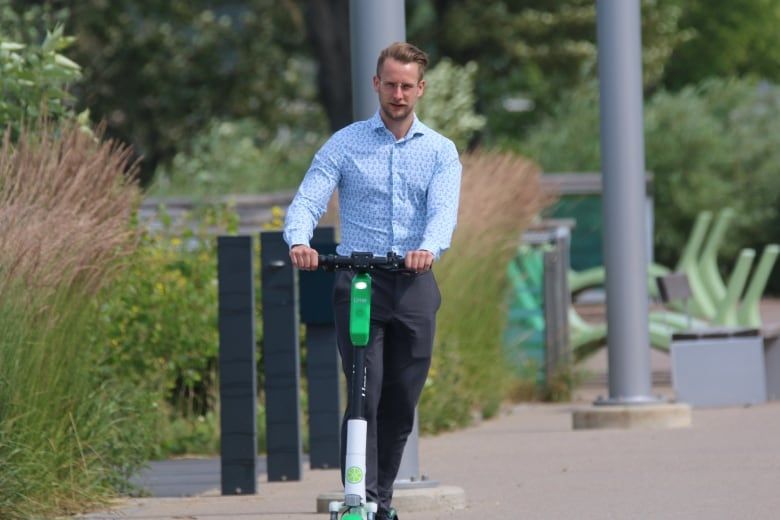 There were more than 100,000 rides recorded on e-scooters within about two weeks of the devices becoming available in Calgary, according to municipal statistics. (Monty Kruger/CBC)

Meanwhile, Bird has expanded to Calgary and Edmonton. The company set up in Toronto's Distillery District for a few weeks last month, so people could to try them in a limited area. Uber's Jump service, offering electric bikes and scooters, is available in Montreal.

Currently, Ontario legislation prohibits e-scooter use on public streets, although the Ontario Ministry of Transportation has started a consultation process on the topic.

Some people have complained the devices are an eyesore and a hazard, as they are often left on sidewalks or in parks. In Calgary, 60 patients with e-scooter-related injuries landed in the emergency room within the first two weeks the ride-sharing e-scooters became available.

Still, the devices have proven to be quite popular. More than 277,000 rides were recorded in August on Lime e-scooters in Calgary, according to municipal statistics. Some people are moving from part-time users to full-time users, and that's driving demand for ownership.

"People don't want to spend a thousand dollars not knowing if it is something they want. If they are able to rent it for a buck a minute or something like that, it just allows them to try it out," said Cheung. The ride-sharing programs are making it easier to sell the scooters because there's familiarity. "They come in and they already know what they want."

In Calgary, it costs only a dollar to unlock an e-scooter, using Lime's smartphone app, and 30 cents per minute after that. 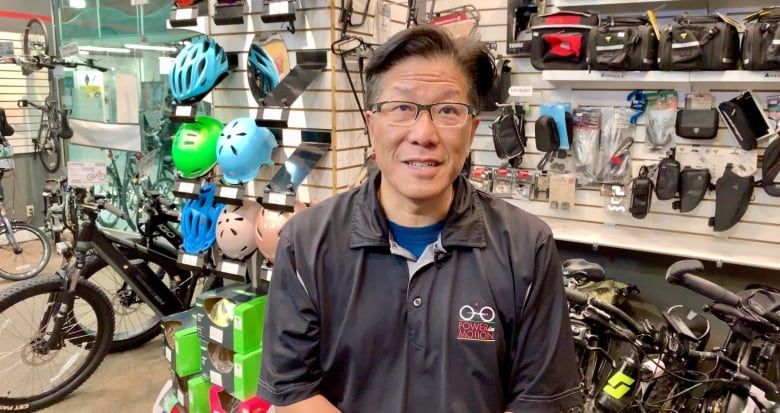 'They come in and they already know what they want,' says Ken Cheung, manager of Power in Motion, about customers asking for e-scooters. (Kyle Bakx/CBC)

Marketing professor David Finch at Mount Royal University in Calgary, said shops haven't had to advertise, since "Bird and Lime are building the awareness of the product to the customer."

"It's a classic 'try before you buy,' said Finch.

"In this context, there was very little market for a scooter because there was no precedent for them in this city. As a result of the Lime and Bird craze that we've seen, people have said this is a relatively efficient approach for micro-mobility, specifically for the downtown core," he said.

Lime and Bird have expanded around the world, but Finch says the drawback in Canada is that the machines can't operate year-round.

"You only have a narrow season for these things," he said. "So, it will be interesting to see whether the business case makes sense, whether you own it or borrow it in a shared format, for something you can only use six months of the year." 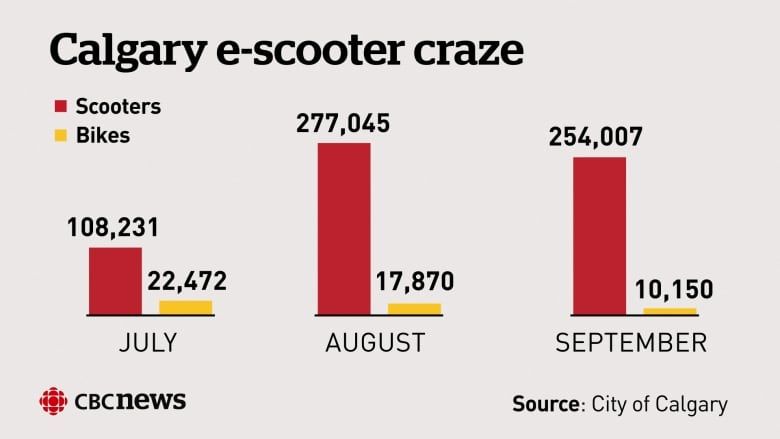 E-scooters became available on July 15 in Calgary. There were about 1,500 active scooters and 300 e-bikes available for use.

In Calgary, personal e-scooters face stricter rules than the ones owned by ride-sharing programs, and are legally confined to pathways

"Operating a personally owned electric scooter anywhere on the road right-of-way, including city sidewalks, bike lanes or roadway, is still illegal [in Alberta]," said Kara Bussey, a spokesperson for the city's transportation department.

"The provincial exemption to operate an electric scooter only applies to the electric scooters owned by permit holders operating in the Shared Electric Scooter Pilot," she said in an emailed statement.