ملفات اخبار العرب24-كندا: Justin Trudeau steps on stage tonight for his first leaders' debate of the 2019 election — and a date with voters who may end up playing an outsized role in deciding whether he stays in power.

The debate sponsor, the French-language television network TVA, reaches a large audience of francophones outside Montreal. These are the voters Trudeau must recruit if the Liberals are to increase the number of seats they hold in Quebec to offset potential losses in other parts of the country.

"Justin Trudeau understands very well that to get a majority, he needs to win over francophone voters outside the cities," said Guy Lachapelle, a political science professor at Concordia University.

"The most recent polls show the Bloc Québécois is first among francophone voters and that's a problem for Trudeau and the Liberals."

The Liberals held 40 seats in Quebec when the election was called. But the party's strength is heavily concentrated in Montreal and its suburbs.

That helps to explain why Trudeau is taking part in two French-language debates but only one in English, after refusing to take part in two others. 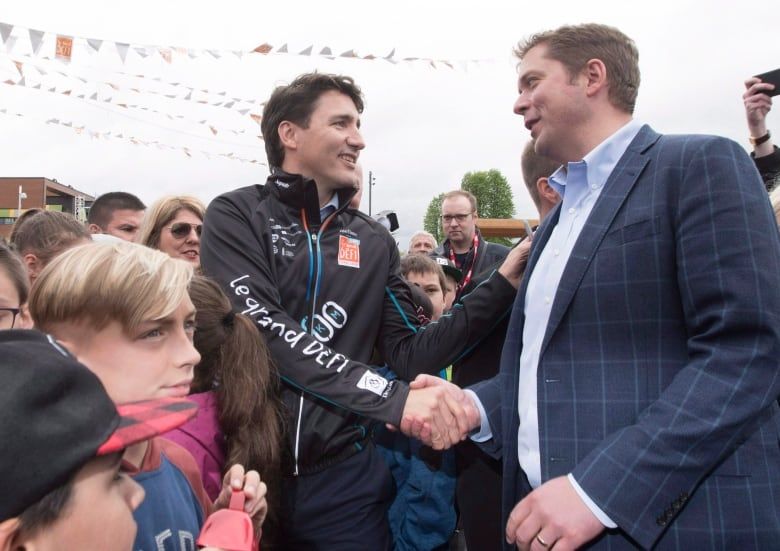 Prime Minister Justin Trudeau, left, shakes hand with Conservative Leader Andrew Scheer in Saguenay, Que. last year. Tonight, the two will face off in a debate with three other leaders in a bid to win crucial votes in Quebec. (Jacques Boissinot/The Canadian Press)

The Liberals are hoping Trudeau will be able to exploit an advantage he enjoys over Scheer: the Conservative leader will debating in his second language.

But the decision to take part in two French language debates also carries risks for Trudeau — risks which may become obvious when the leaders square off, one-on-one, on immigration, Quebec's place in Canada, the economy and the environment.

"Justin Trudeau needs to convince Quebeckers — especially unilingual francophones — that he shares common interests with them," said Carl Vallée, a former spokesman for Stephen Harper and a partner in the public affairs firm Hatley Strategies in Montreal.

Vallée said that, for Trudeau, connecting with the francophone audience means avoiding (as much as possible) any discussion of Bill 21, the controversial provincial law which bars Quebec public servants — including teachers and police officers — from wearing visible symbols of their religious faith. 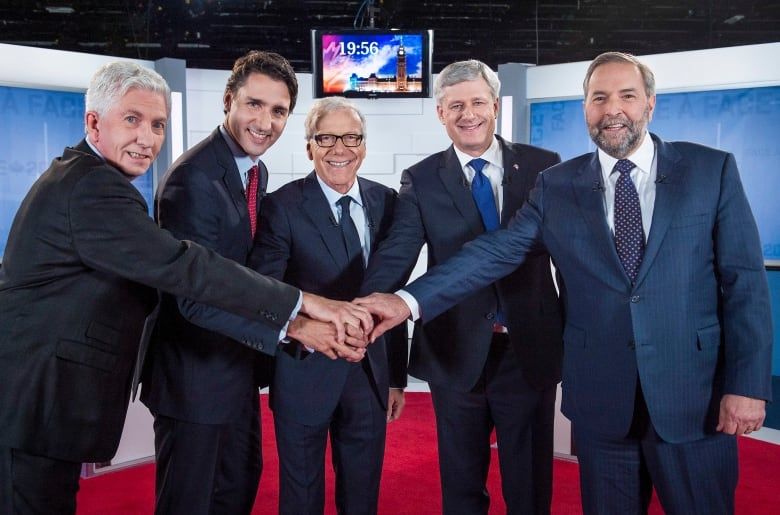 The law, introduced by Premier Francois Legault's Coalition Avenir Quebec government, is popular throughout the province. And it's become a major rallying point for the Bloc's Blanchet — who, unlike the other leaders, isn't running to be prime minister and whose party has no interest in forming a government.

"He will talk about religious symbols as often as he can in the debate," said Yolande James, the former Quebec Liberal cabinet minister who is now a political commentator with Radio-Canada. "You can expect Blanchet to position the Bloc as the only party that will protect Quebec's right to make these decisions. It's a wedge issue for him." 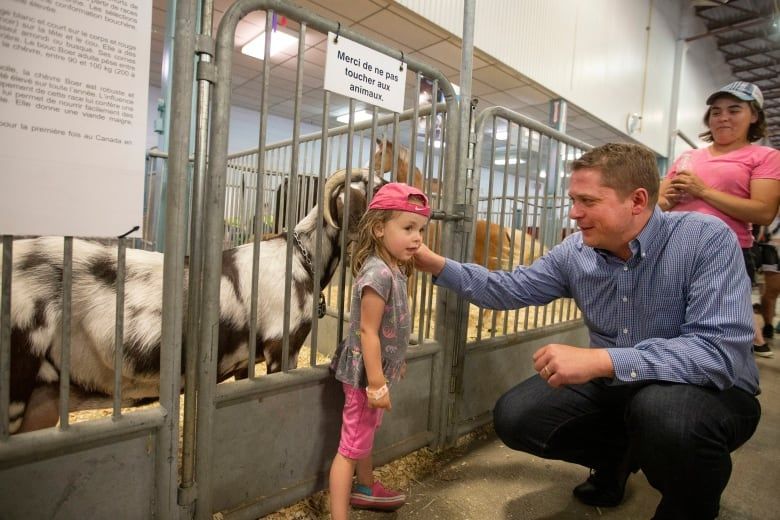 Lachapelle said he believes Trudeau also will be challenged to defend his record on the environment.

"He will have to explain why he bought a pipeline for Alberta and is not promoting a new electrical grid for Quebec's hydro," he said.

And then there are the lingering questions about Trudeau's leadership. James said Trudeau can expect to targeted over his handling of the SNC Lavalin file as part of a broader attack on his judgment.

"The risk for him is that, in this election, he's being chased by the other leaders," he said. "They are going to come at him from all angles, not just on SNC Lavalin but over the number of times he's appeared in blackface, for example." 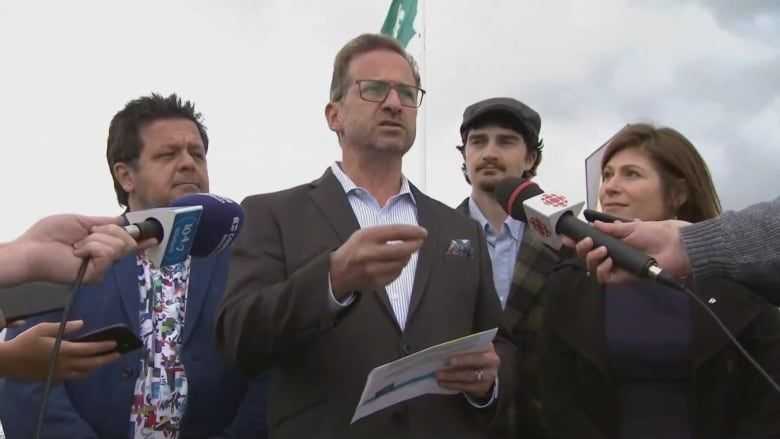 If the stakes are high for Trudeau, they might be even higher for Scheer and Singh.

The Conservatives hold 11 seats in and around Quebec City and up the Saguenay Valley. The party hopes to pick up some of the ridings strung along the north shore of the St. Lawrence River.

"It's a big step for him," Scheer said during a campaign stop on Tuesday, adding he intends to highlight what he called four years of Liberal scandal and corruption.

"My message to all Quebecers, to all Québécois, is that a Conservative government will respect the right of provinces. We believe in respecting provincial jurisdiction and that we are committed to addressing some specific challenges and issues in Quebec, like the single income tax return."

Vallée said Scheer's best strategy is to reach beyond the studio.

"He needs to speak directly to voters. Focus less on the other leaders and more on the camera," he said. "This debate is the best way to get to nationalist, right-of-centre voters who went massively to the CAQ in the provincial election."

Singh faces the bleakest prospects heading into the debate. Eight years ago, the NDP under Jack Layton won 59 seats in the province. In the 2015 campaign, that number dropped to 16. Polls suggest the NDP is in danger of being shut out of the province entirely on Oct. 21.

"I am looking forward to having an opportunity to confront Mr. Trudeau because he has broken promises," Singh told reporters in French at a campaign stop on Tuesday.

Bloc re-emerges as a force

But the real challenge for both the Conservatives and the New Democrats is the re-emergence of the Bloc as a force in Quebec. 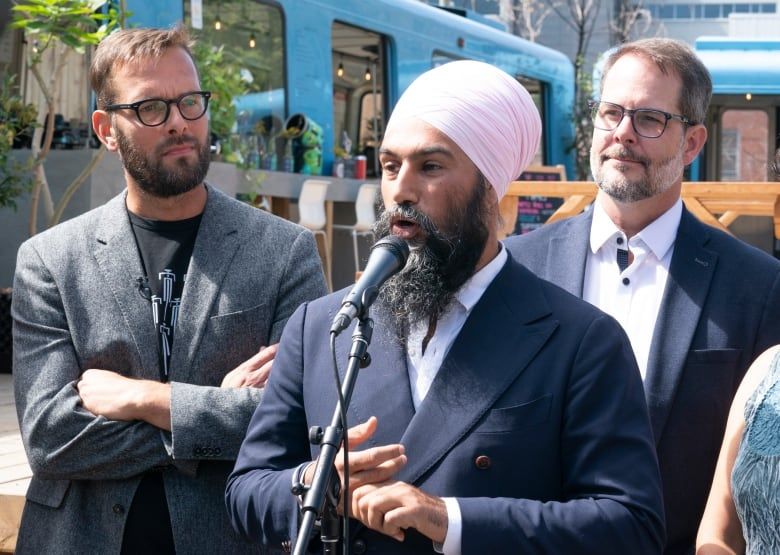 Lachapelle said he believes the Conservatives will be happy to hold the seats they already have — but even that may depend on Scheer's ability to convince voters that he has a long-term view of Quebec's place in Canada, one that goes beyond the traditional notion of "distinct society" to embrace the kind of nationalist pitch being made by Legault's government.

Quebec has always had a profound influence on federal politics. More prime ministers have come from Quebec than any other province; both Justin Trudeau and Pierre Trudeau launched their political careers there. And Quebec voters exhibit an uncanny knack for identifying and riding incoming political waves like practiced surfers — as they did with Jack Layton's NDP in 2011.

It all suggests Trudeau and Scheer will be spending much of the remaining three weeks of the campaign in the province.

Each will be looking to counter the growing popularity of the Bloc, trying to present the party as a sovereigntist entity out of step with Quebec voters who no longer see independence as their ultimate political goal.