Canada Border Services Agency officers who seized Meng Wanzhou's phones, laptop and tablet when she arrived at Vancouver's airport in December 2018 later mistakenly gave the phone passcodes to the RCMP.

Lawyers for Canada's attorney general admitted the error in B.C. Supreme Court on Tuesday as they tried to shoot down a theory that the CBSA and RCMP had conspired to violate the Huawei chief financial officer's rights at the time of her arrest.

Meng's lawyers claim the agencies acted at the behest of the RCMP to conduct a "covert criminal investigation" against their client.

"When we consider this part of the process, and the fact that there was an error — that has to be looked at in the entire context," said Majzub.

"The fact of an error in the process is not an air of reality that the process was a sham."

The Crown has spent the past two days refuting the defence allegation that Meng was the victim of an abuse of process when she was screened and questioned by CBSA officers before being officially arrested on an extradition warrant.

American prosecutors want the 47-year-old sent to the U.S. to stand trial for allegedly violating U.S. sanctions against Iran by lying to banks about Huawei's control of a hidden subsidiary. 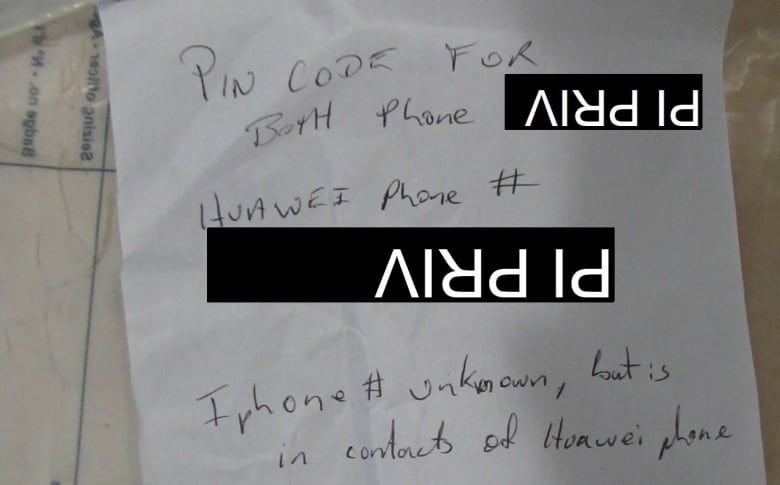 CBSA officers asked Meng Wanzhou for the passcodes for her phones when they seized her electronic devices. They later passed those codes in error to the RCMP. (B.C. Supreme Court)

The company — which Huawei claimed was a "local partner" in Tehran — was accused of attempting to sell American telecommunications equipment in violation of the U.S. regulations.

Meng is living under house arrest in a multimillion dollar home on Vancouver's West Side; she has denied the allegations.

Meng's extradition hearing is set to begin in January 2020, but this week her lawyers are trying to convince Holmes to issue an order for records to bolster their abuse of process claim.

The Crown has said the CBSA and RCMP acted appropriately, making sure that Meng was screened for admissibility before she was arrested. 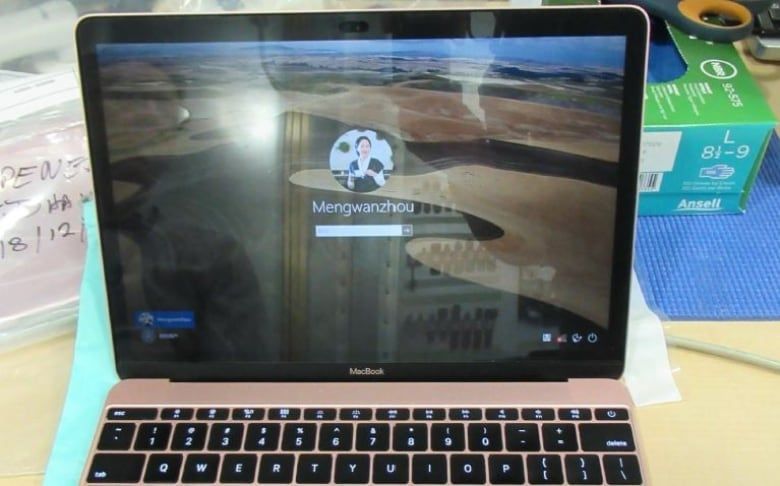 CBSA officers seized Meng Wanzhou's laptop along with her phones and other electronic devices. Crown lawyers claim they were within their rights to do so. (B.C. Supreme Court)

Majzub argued that the law allows border officers to take phones from travellers, ask them for the passcodes and even to search them — all in the name of deciding if someone should be allowed into the country.

He said CBSA officers had legitimate reason to question Meng and to take her electronic devices because of the existence of fraud allegations which suggested she might be ineligible because of serious criminality.

Majzub said the law allows CBSA officers to search all "goods" crossing the border with travellers — and that the definition of "goods" includes cellphones.

Meng was carrying an iPhone 7 Plus, an IPad Pro, a Macbook Air and a Huawei Mate 20 phone when CBSA officers met her on the jetway after she landed in Vancouver on arrival from Hong Kong.

According to the defence, the FBI had asked that the devices be immediately seized and placed in special bags designed to ensure that their contents could not be remotely wiped. 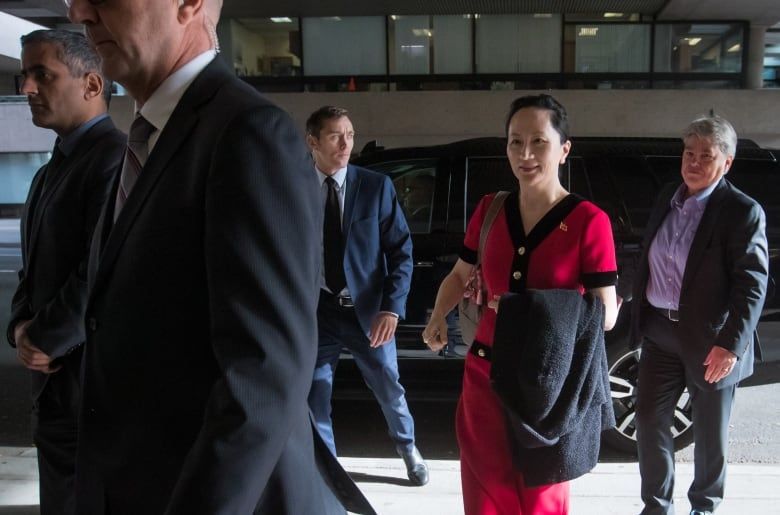 Meng Wanzhou is flanked by security guards as she heads to B.C. Supreme Court in Vancouver. The terms of her bail require 24/7 monitoring. (Darryl Dyck/Canadian Press)

The CBSA officers who took the phones also compelled Meng to give them the passcodes.

The Crown lawyers claim the devices have never been searched, but were passed to police by mistake.

In an email included in an affidavit filed with the court, Vancouver airport CBSA chief of passenger operations Nicole Goodman said she wrote to the RCMP after learning of the error.

"I advised the RCMP the passcodes should not have been provided by CBSA as the passcodes were CBSA information obtained during the CBSA examination, and that the passcodes could not be used to access the devices nor shared with a third party (ie. other law enforcement agency)," Goodman wrote.

'Not a deliberate action'

In order to reach a decision, Holmes has to decide whether there is an "air of reality" to the theory the defence has put forward — not whether a conspiracy actually exists.

Holmes asked Majzub what he had to say about the fact the passcodes were passed between the agencies.

He asked her to consider the extraordinary powers of the CBSA and their duties to screen passengers thoroughly, suggesting that any mistake considered out of context can be misleading.

"When Your Ladyship does that, the result should be the conclusion that that was not a deliberate action but an error," Mazjub said.

Meng has attended the proceedings in person, walking past a phalanx of cameras daily as she leaves her home to head to the downtown courthouse each morning.

According to the court documents, Meng owns homes in both Hong Kong, where protestors have been marching against authoritarian rule and in Shenzhen in Mainland China, where Huawei has its headquarters.

As China marked the 70th anniversary of Communist rule with a show of force, Meng wore a Chinese flag pin on a long red dress which hung just above the ankle monitor she wears as part of her release.

The court proceedings are expected to last all week.