ملفات اخبار العرب24-كندا: Wesley Weber, left, is seen with his lawyer, Selwyn Pieters, outside court in Toronto after a hearing in July. Prosecutors are asking for an unprecedented sentence after he pleaded guilty to a Securities Act offence in January. The defence asked for a non-jail sentence. (CBC)

Wesley Weber, one of the main players behind a high-profile chain of illegal Ontario pot shops, deserves another 15 to 16 months in jail for an unrelated conviction, Ontario's securities regulator urged a judge on Monday.

Weber, who CBC News recently revealed as one of the people behind the CAFE chain of unlicensed dispensaries in Toronto, was in provincial court for a sentencing hearing on his latest in a long string of infractions.

In January, he pleaded guilty to breaching a 2011 Ontario Securities Commission order that banned him from trading in securities for 15 years.

"As a breach, this is the most serious breach there can be," OSC senior prosecutor Rachel Young said in asking for the unusually long sentence for a Securities Act violation.

The OSC's written sentencing submissions say Weber "took intentional and deliberate steps to circumvent the cease trade order, including using a different surname, and he has demonstrated outright contempt for the regulator that made the order against him."

Weber's lawyer, Selwyn Pieters, who also represents defendants in a number of drug cases stemming from law enforcement raids on CAFE, reminded the court that Weber's offence was not fraud, caused no proven investor losses and that no restitution was necessary.

"We would say that at the maximum, you should give him 30 days," Pieters told the judge. Pieters suggested Weber really merits a non-jail sentence involving probation and community service.

Judge Malcolm McLeod is scheduled to pass sentence on Oct. 28.

The Securities Act conviction is just the latest in a long line of infractions for Weber, a native of the Windsor, Ont. area. His 43-count criminal record, filed in court, stretches back to 1997 and ranges from assault to fraudulent personation, driving while under a court ban, mischief and operating an illegal cannabis grow-op.

In 2001, he was convicted for his role in a headline-grabbing scheme to counterfeit $100 bills that prosecutors claimed was a reason many businesses in southern Ontario stopped accepting the bills. The Bank of Canada calls him "one of the most well-known counterfeiters in Canada in recent years." 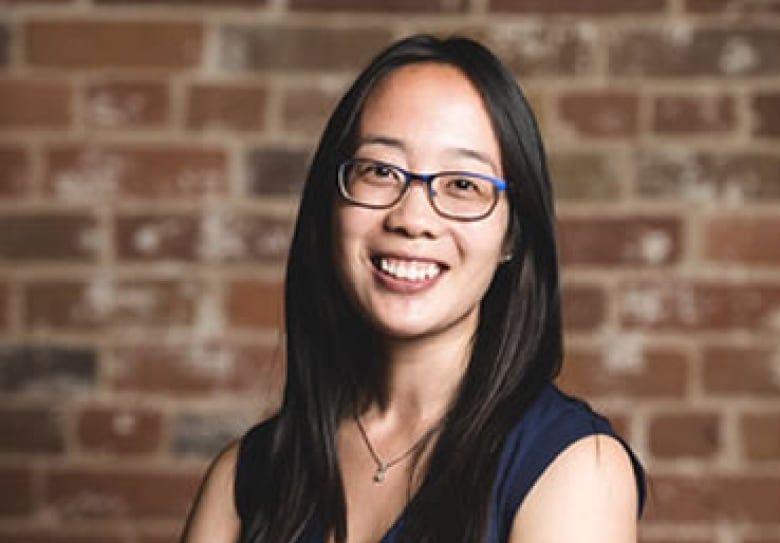 Weber's spouse, real estate broker Michelle Kam, told the court Monday that he is a 'kind man,' and a 'great father.' (LinkedIn)

Weber has used at least three different aliases over the years. The agreed statement of facts from his guilty plea says he went by the name "Wesley Kam" while running a digital currency company called Incryptex, "so that he could operate Incryptex without his past being known."

Weber's latest venture has been CAFE, or Cannabis and Fine Edibles, a chain of four sleek Toronto coffee shops that double as unlicensed marijuana dispensaries.

Co-founded in 2016 by lifelong friend and fellow Windsor-area native Jon Galvano, CAFE gained a loyal following in Toronto as it bucked more than a dozen police and bylaw enforcement attempts to shut down its stores. Officers would raid them and then weld the doors shut or pile up huge cement blocks outside to block entry. But often within hours, the locations would reopen.

CAFE landlords face up to $3.6M in total fines

CAFE came up in court on Monday when retired RCMP sergeant Steve Han, who led the Ontario Securities Commission investigation into Weber, testified about efforts to discover his role in the chain of pot shops.

"I observed Mr. Weber inside the business, seated inside by the window, and I didn't observe him doing anything," Han said of a visit to CAFE's location on Toronto's Fort York Blvd. on Aug. 21, 2018.

"I reattended that business, and spoke to the same female host there, and she told me that Mr. Weber was the owner."

CAFE's locations have mostly been barricaded shut by law enforcement since July, but a number of them continued to sell cannabis from out front. 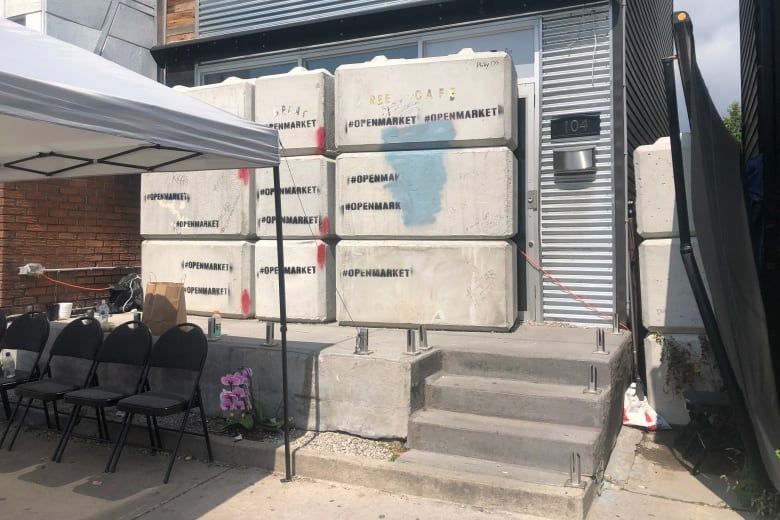 The City of Toronto has tried to shut down CAFE's locations by blocking them off with cement slabs, but the company set up chairs and canopies in front of a number of locations to continue to sell cannabis. (Chris Glover/CBC)

The landlords of the four Toronto locations have been charged with a total of 11 counts under Ontario's Cannabis Control Act, under the section making it illegal to "knowingly permit a premises of which he or she is a landlord to be used in relation to" unlawful sale or distribution of cannabis. The maximum total penalty they could face would be $3.6 million.

Those landlords include Ali Gillani, who was at one point the chief operating officer and a director of Weber's company Incryptex — the very company that got him in trouble with the Ontario Securities Commission.

Gillani did not return a call or email earlier this summer seeking comment. 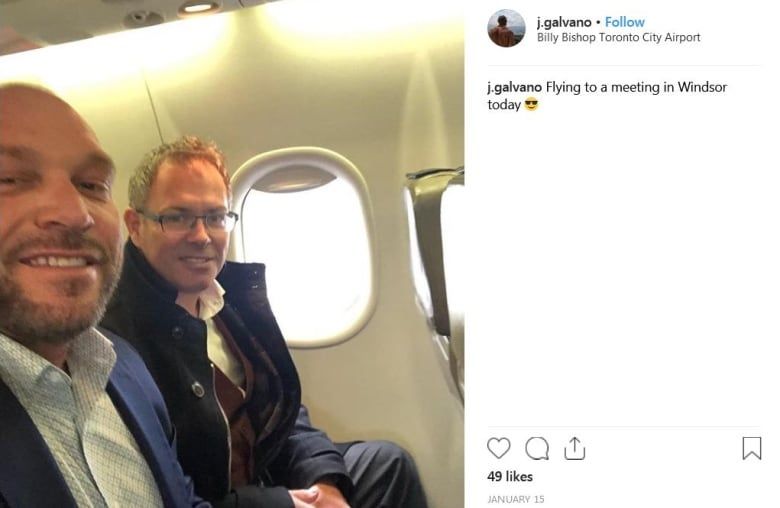 CAFE co-founder Jon Galvano, left, and Weber are seen 'flying to a meeting in Windsor' in a photo posted to Galvano's Instagram feed in January. (j.galvano/Instagram)

Another CAFE landlord is a federally registered numbered company, 10956392 Canada Inc. Weber's spouse, real estate broker Michelle Kam, filed the incorporation papers and signed property records for the corporation and is also named as the guarantor on its $1.7-million mortgage. Until February, she was the company's only director.