ملفات اخبار العرب24-كندا: An Ottawa couple is suing their former landlord after a hot water pipe burst in their apartment, filling their closed bedroom with searing steam that they say "boiled" their pets to death, but Minto has filed a counterclaim seeking damages of its own. 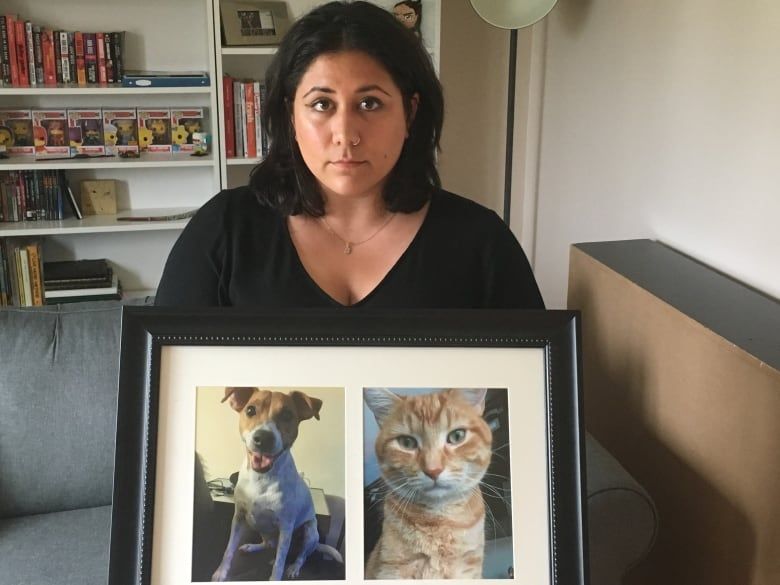 Samantha Testa holds photos of her dog Gambit and cat Lion-O. The animals died after a hot water pipe burst in her apartment in December 2018. (Kimberley Molina/CBC)

An Ottawa couple is suing their former landlord after a hot water pipe burst in their apartment, filling their closed bedroom with searing steam that they say "boiled" their pets to death, but Minto has filed a counterclaim seeking damages of its own.

Samantha Testa and Jake Barnabe were living in a Minto-owned lowrise apartment building on Deerfield Drive when the pipe burst on Dec. 8, 2018. The couple had been out for breakfast and came home to find firefighters in their steam-filled apartment, where their dog Gambit and cat Lion-O lay dead on the floor.

There were claw marks near the bedroom door where she believes the pets had tried to escape, Testa said.

They knew they had to get out, and they couldn't.- Samantha Testa

"Because our bedroom door was closed, our animals essentially were trapped and boiled to death," she said. "They knew they had to get out, and they couldn't."

Testa said the pipe that burst was connected to a radiator underneath their bedroom window. The apartment was flooded, ruining about 80 per cent of their belongings, but Testa said losing their beloved pets was the worst part.

"Had it honestly just been our stuff, I think it would have been much less traumatic. But when we walked in, the only thing I remember seeing now is my animals on the floor," Testa recalled.

"I felt like I let them down because we could have been home, and instead we chose to go out to have breakfast, and had we not made that decision we probably could have saved their lives." 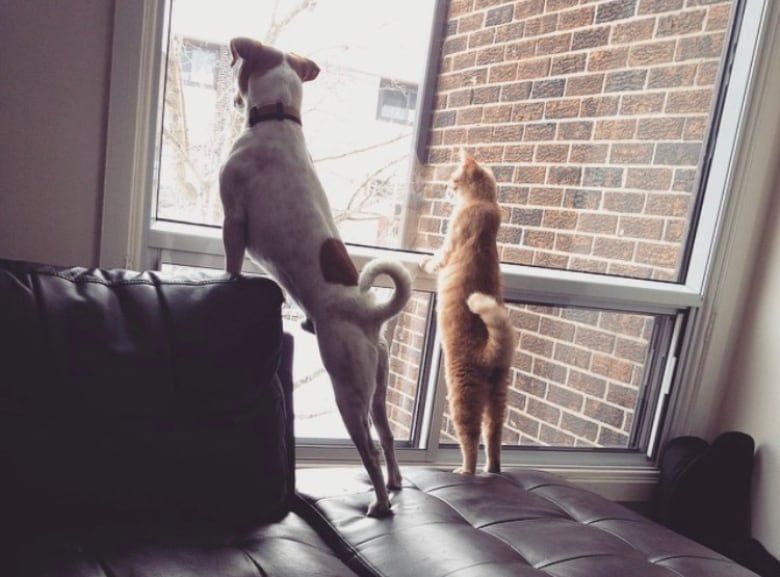 'One or both were always cuddling with us, so when we had nothing, it was very, very difficult. We both felt alone,' Testa said of the loss of the pets she owned with her husband. (Samantha Testa)

The couple moved out the same day and stayed with Testa's parents for a time before buying a new house.

Their tenants' insurance covered their moving costs, but the couple are now seeking $25,000 from Minto — the maximum allowed in Ontario small claims court — for two months rent plus "general, special, exemplary and punitive damages."

The lawsuit claims the pipe that burst was broken, but in its statement of defence and counterclaim for water damage to the couple's apartment and two others, Minto denies that.

In the court documents, the landlord claims a plumber found "there was a pane of glass not installed in the bedroom window and that there was a draft coming from the location of the missing window pane." The plumber "determined that the pipe had burst because it froze."

The company is seeking $9,137.53 plus interest and court costs for damage to walls, ceilings, baseboards and trim. 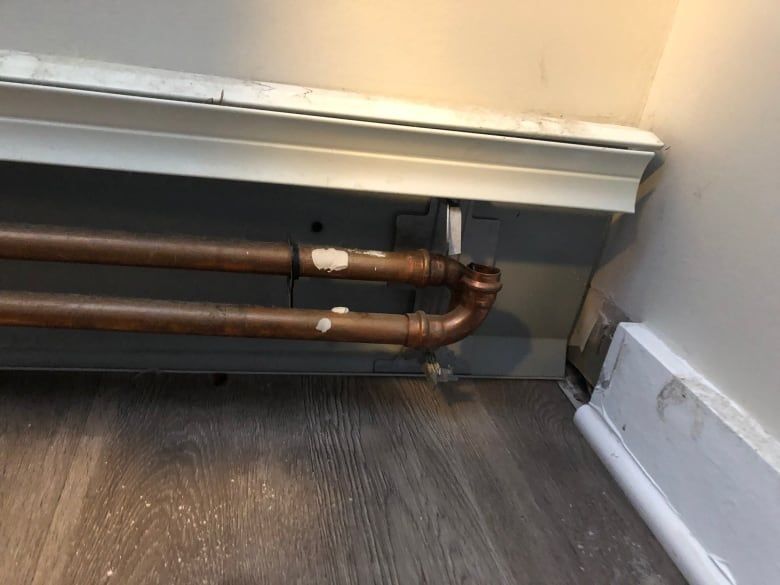 The radiator pipe, located under the couple's bedroom window, burst on Dec. 8, 2018, turning the closed room into a sauna. (Samantha Testa)

Testa said she and her husband had only been able to replace one window pane after removing their air conditioner at the end of summer.

The temperature in Ottawa the night before the pipe burst reached a low of –19.6 C, according to data from Environment Canada that was recorded at the Macdonald–Cartier International Airport. Nevertheless, Testa said the bedroom didn't feel cold that morning, and wonders how a hot water pipe could have frozen when the room was still a comfortable temperature.

Minto would not discuss those details while the couple's claim is before the courts, but in a statement to CBC, senior vice-president George Van Noten said: "At Minto Apartments, the safety and security of our residents and their pets is our top priority. We recognize how difficult the death of a pet is, and extend our sincere condolences to this family for their loss." 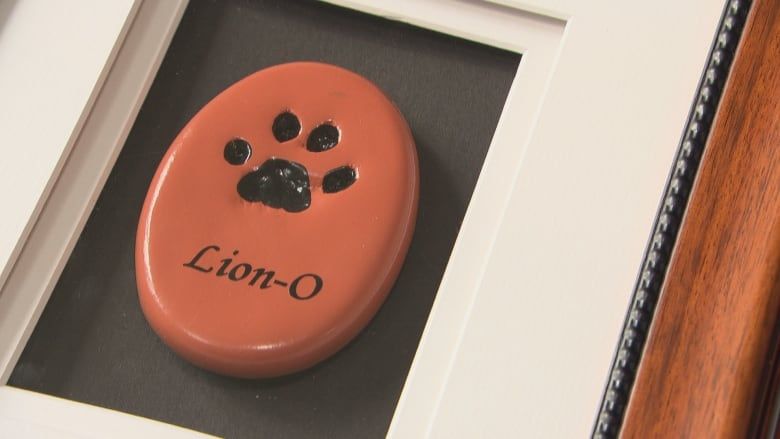 Photos and paw prints are all that remain of the couple's pets. (Raphael Tremblay/CBC)

Testa, who said she now becomes anxious whenever she hears a fire truck siren, believes the couple deserves compensation for their mental anguish.

The couple's lawsuit also raises the possibility of what might have happened had they been in the nearby bed when the pipe burst.

"The pipe was located on the wife's side of the bed which could have been deadly for her had it explode[ed]," the lawsuit states.

In a separate lawsuit, Testa is suing Minto after she claims she tripped on her building's staircase and injured her leg.

Samantha Testa says she and her partner were out for breakfast last year when a pipe burst in their apartment, killing the couple's two pets. 1:40

Landlords are responsible for the upkeep of any infrastructure, including pipes, said Gilles LeVasseur, a professor of business and law at the University of Ottawa who specializes in the rights and responsibilities of landlords and tenants.

Tenants can be found liable if they leave a window open and a pipe freezes, which can happen in older homes, he said.

But he said it's uncommon for landlords to come after tenants for those costs, because they have to demonstrate that the tenant was negligent and careless, and must prove the damages and repair costs.

"A lot of landlords will say, 'Well, it's part of the business,' and if it's a big damage, that's called insurance,"  LeVasseur said.

Since Gambit and Lion-O, Testa and her husband have adopted a new rescue puppy, Cooper.

"Having him love us and us being able to pour our love back into another animal who needed it, is exactly what we needed," Testa said.